Shadyside to battle with Fort Frye in all OVAC Division VI, Region 23 Final 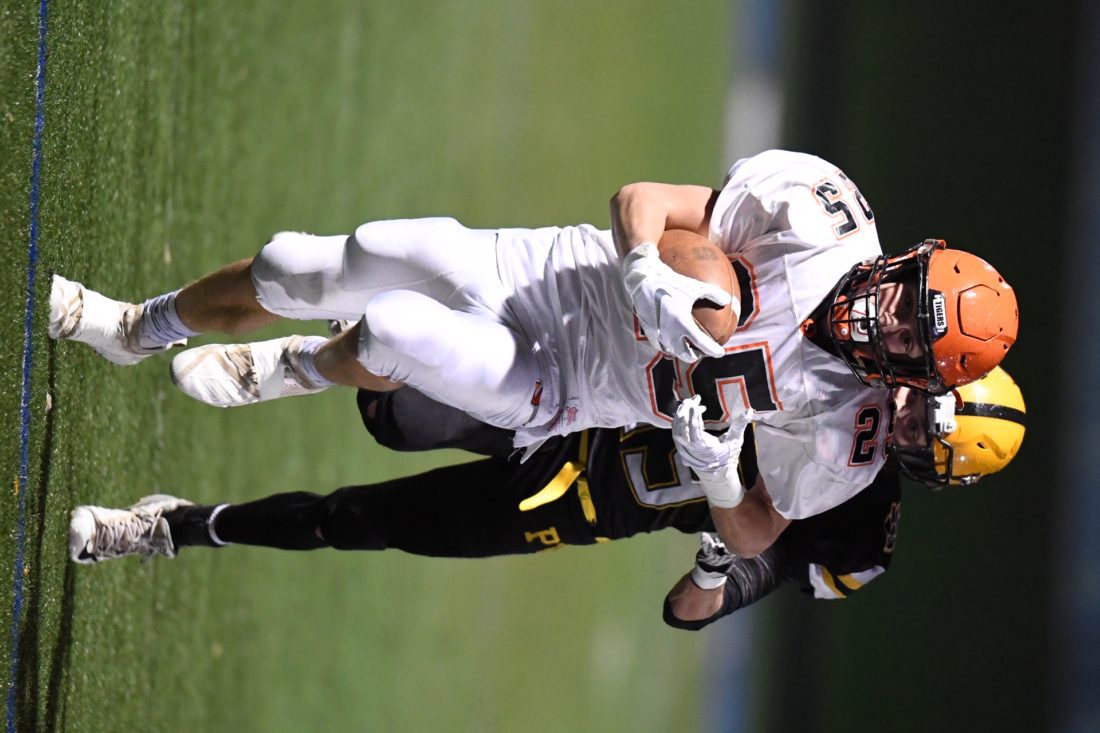 Photo/PAUL KRAJNYAK SHADYSIDE’S freshman Wyatt Reiman has been an impact player on both sides of the ball all season for the Tigers.

BYESVILLE — The Ohio Valley Athletic Conference is guaranteed a Division VI state football semifinalist as league members Fort Frye and Shadyside will collide in the Region 23 championship game Friday night at Eugene Capers Field on the campus of Meadowbrook High School. Kickoff is set for 7.

The Cadets (11-0) and Tigers (10-2) both captured OVAC championship banners for their fine seasons. The Beverly-based contingent claimed the Class 3A flag, while the Orange-and-Black were Class 2A titlists. Both squads have also played very well thus far in the postseason as second-seeded Fort Frye has eliminated No. 7 Milford Center Fairbanks (34-14) and third-seeded Galion Northmor. Shadyside, the fourth seed, knocked off No. 5 Frankfort Adena (34-6) and top-seeded Bainbridge Paint Valley (40-6).

“They are very polished at what they do offensively. They are the best team we’ve played all season,” Shadyside head coach Mark Holenka said of the Cadets who average just under 40 points an outing and give up just 13. “We’re going to need some turnovers to go our way because straight up we’ve got our hands full.”

Fort Frye’s wing-T offense is centered around senior quarterback Tate Engle (5-8, 181). The 4-year starter has accounted for nearly 1,500 yards of total offense, with 1,285 of that coming through the air where he is 73-for-137 (53 percent). He has tossed 17 touchdowns compared to just three interceptions, and he has been sacked nine times. He has rushed 80 times for 220 yards and four scores.

“He is the hub of their offense. He has great DNA and makes it look effort when he is handing the ball off,” Holenka praised of the first team all-Eastern District performer. “However, he has some awfully good running backs and a pretty good receiver. Their offensive line isn’t huge, but it is good.”

Fort Frye Head Coach Eric Huck, who was named the D-VI Eastern District Coach of the Year, said he sees a lot of similarities between his Cadets and the Tigers.

“They are not the biggest bunch, but they play hard and you can tell they are very disciplined by watching them on film,” Huck alluded. “They play hard on both sides of the ball.”

The Cadets have been led on the ground by junior wingback Tyler Fisher (5-10, 162) with 1,090 yards and 17 touchdowns on 115 carries. He was also a first team all-Eastern District selection.

Schob was second team all-Eastern District at running back.

“We’re pretty much a veteran team,” Coach Huck revealed. “This is our fourth straight year in the playoffs and seventh overall.”

Fort Frye is 5-6 overall in postseason play. It lost last year in the regional semifinals to Nelsonville-York (26-20, OT) and advanced to the regional finals in 2016 before falling to Newark Catholic (41-7). In 2015, the Cadets lost in the first round to Fredericktown (13-0).

“If we can make them throw the ball and be happy with it, then we’re doing our job defensively,” Holenka said. “Their ground game is just so proficient.”

Defensively, the Cadets will primarily lineup in a 4-4, but will switch it to a 4-3 at times, according to Holenka.

“They like to run to the ball,” he noted.

The inside ‘backers are Hart and Schob who are the top two tacklers with 102 and 90, respectively. Joining Huck on the outside is junior Caden Fryman (6-2, 176) who charted 71 tackles.

Manning the corners are Fisher and Shilling. Adkins is the free safety. Shilling picked off a team-best five passes. Fisher was one behind.

Shadyside has been led offensively by senior quarterback Anthony Coggins (6-0, 155). The two-year starter came into his own this season as he earned all-Eastern District Offensive Player of the Year. He has completed 59 of 166 passes (59 percent) for 2,294 yards and 23 touchdowns to go along with five interceptions. He has also carried the leather for 166 yards and two more scores.

“Anthony has really had a fine season,” Holenka said. “He is a lot more poised this year and isn’t making any mistakes.”

When he takes to the air, he usually looks for juniors Kelly Hendershot (6-2, 165) or Sam Merryman (6-2, 185). Hendershot, an athletic junior who was an all-Eastern District first-team selection, has caught 47 passes for 753 yards and nine touchdowns. He is also a capable runner with 233 yards and three TDs on just 16 carries. Other potential receivers are seniors Austin Price (6-3, 180) and Colin Holmes (5-8, 155).

The running backs are a three-headed monster and include senior tailback Connor Banco (6-2, 205), sophomore fullback Jacob Visnic (5-10, 200) and freshman Wyatt Reiman (5-9, 150). Banco, who missed two games with an injury, is the leading rusher with 725 yards and 15 touchdowns. Visnic has added 358 and seven TDs, while Reiman, who also missed a pair of contests, has run for 280 yards and six scores on 50 carries.

“Shadyside is very athletic. They throw the ball really well and they run it really well,” Coach Huck said. “They are very balanced, well-coached and have a lot of threats.”

The Tigers line has come up huge in the second half of the season. It dominated last week’s game against Paint Valley.

Defensively, the Tigers have put together back-to-back superb efforts as they have allowed just 12 points in the playoffs.

Banco, Visnic and Reiman roam the second line of defenders, while a pair of talented youngsters — freshman Rhys Francis (6-0, 153) and sophomore Jordan Joseph (5-9, 155) — man the corners. Hendershot is the free safety and Holmes the strong safety.

“We need to continue to do a good job of finding the football,” Holenka stressed. “They are like Wheeling Central in a sense. They can run a play6, 7 or 8 times and we can stop it, but on that ninth time they can break the same play for a big gainer. We must play consistent and limit their big plays.”

Shadyside excelled on special teams last week, but according to Holenka, it was just another game for that unit.

“They’ve been playing well all season,” he said. “Sometimes everything falls into place and that is exactly what happened last week.”

Hendershot setup a touchdown with a long punt return. Holmes ran a punt back for six points and sophomore Angel Velasquez (5-3, 110) booted his first career field goal — a 34-yarder.

The winner will meet the victor of Region 21 between Kirtland (12-0) and Mogadore (11-1) next Friday in the state semis at a site to be determined Sunday by OHSAA officials.