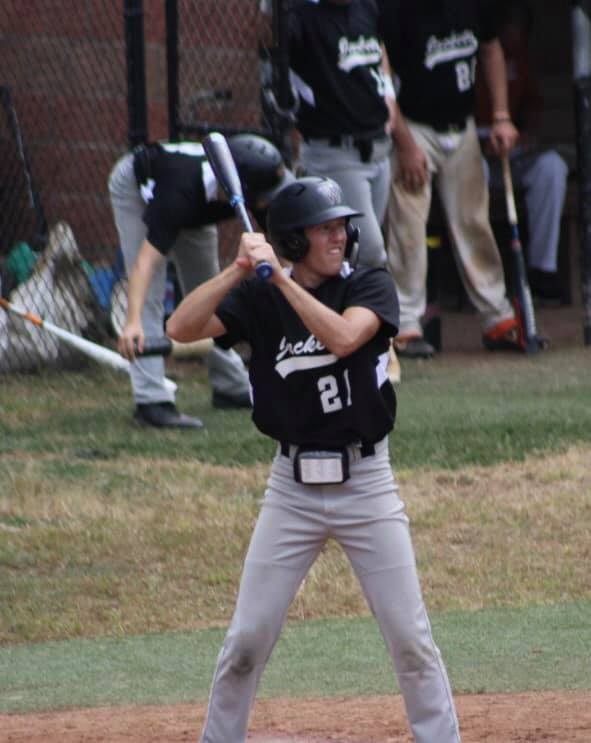 Ty Kildow spent the last few months of his freshman year at Waynesburg with cold-like symptoms that he simply couldn’t shake.

Like most young adults, Kildow really didn’t think much of it because, otherwise, he felt completely “fine and normal.”

It wasn’t until he had returned home from school for summer break that his mother, Julie, noticed “a pretty large lump” around Kildow’s collarbone area.

“I was just getting out of the shower and my mom stopped to ask me something,” Kildow said.

Julie didn’t waste any time and Ty didn’t put up any kind of argument. She promptly called Morristown Family Practice, who got Kildow in later that day.

“That was May 14th,” Kildow recalled.

“It was suspected to by a type of lymphoma and on May 28th, we got the call that it was (definitely) Hodgkin’s Lymphoma,” Kildow said.

Having two weeks to brace themselves for the possibility of the test coming back positive for cancer, when Kildow and his family heard from a doctor that it was Hodgkins Lymphoma and not Non-Hodgkins, which is deemed much more severe, there was actually a relief. But, they also knew a long road ahead awaited.

“I really didn’t know what lymphoma was,” Kildow admitted. “So, my initial reaction was, ‘how long was I going to have it and when would I be back to normal?'”

Since his diagnosis, Kildow and his family have been going back-and-forth to receive treatments at the James Cancer Center at Ohio State University. Thus far, Kildow has received nine of his 12 scheduled treatments. His next treatment is Friday and the final one is scheduled for Nov. 15.

Having been diagnosed several months before he would have to go back to Waynesburg to begin the fall semester, Kildow, who is a Union Local High School graduate, really never thought much would change because he hoped “to be done with (treatments) before going back to school.”

Unfortunately, doctors had other ideas. Actually, the doctors warned him about even going back to school at all during the fall.

“I had planned to take 17 credit hours,” Kildow said. “But, some of the doctors weren’t sure if I would be able to or should even go back to school in the fall because they didn’t think I’d have the energy.”

A compromise was needed because Kildow isn’t just a student at Waynesburg. He’s also a member of the baseball team.

“I adjusted my schedule to take 13 credit hours instead,” Kildow said. “I just wanted to get back to school and be able to play baseball in the fall.”

Kildow has met with several physicians during this ordeal and one, in particular, wasn’t too keen on him continuing his baseball career this soon

“One doctor made me initially think that I definitely wouldn’t be able to play in the fall and also said that I would most likely not be 100 percent by the spring even,” Kildow recalled. ”

Combining his love of baseball and his immediate desire to beat lymphoma, Kildow wasn’t about to let his illness deny him.

“I always knew that eventually I would be able to play again,” Kildow pointed out.

Last month, just as he had planned, Kildow returned to the baseball field with his teammates, playing in a fall game. Kildow wasn’t just in the lineup as a token appearance. He started in the middle infield and hit a home run.

Kildow, who expressed his appreciation for the support he’s received from his teammates and coaches, said “joy” was the best word to describe the immediate reaction when he saw the ball clear the fence.

“It was pretty cool to see my teammates’ reaction, especially since I’m definitely not a (batting practice) home run guy,” Kildow said. “All of the guys were pretty excited for me. It was just a really cool moment. That was my first home run since I was eight years old.”

That moment aside, Kildow said, otherwise, the return to the field — and classes — have “felt pretty normal.”

“From the time I was first diagnosed, both of my parents (Todd and Julie) were really emotional about the whole situation,” Kildow said. “I was worried at first about how long it would take, but once I found out how long I would have to have treatments, I didn’t think much about it. I just prayed and trusted that God would watch over me and eventually everything would be fine.”

Kildow considers himself fortunate to have the opportunities that he does both athletically and academically.

“I was very grateful for the opportunity to be able to play with cancer, especially when some doctors weren’t sure if I would be able to,” Kildow said.

Sometimes, Kildow does feel a little more fatigued than he did prior to his diagnosis.

“When I am playing in a game, I feel pretty much completely normal, but sometimes in practice I feel out of it,” Kildow said. “I tend to take naps though before or after practice frequently, so it does take a small toll on me.”

For the first time in his athletic career, Kildow’s goals for the upcoming season center around himself. But, who can blame him?

“I want to put myself in the best situation to be able to be 100 percent physically and health wise for the spring season,” Kildow said. “I believe I will be able to do that. Beyond that, the number one goal is to finish the regular season in the top four of the (President’s Athletic Conference) and have a chance to compete for the championship in the conference tournament.”