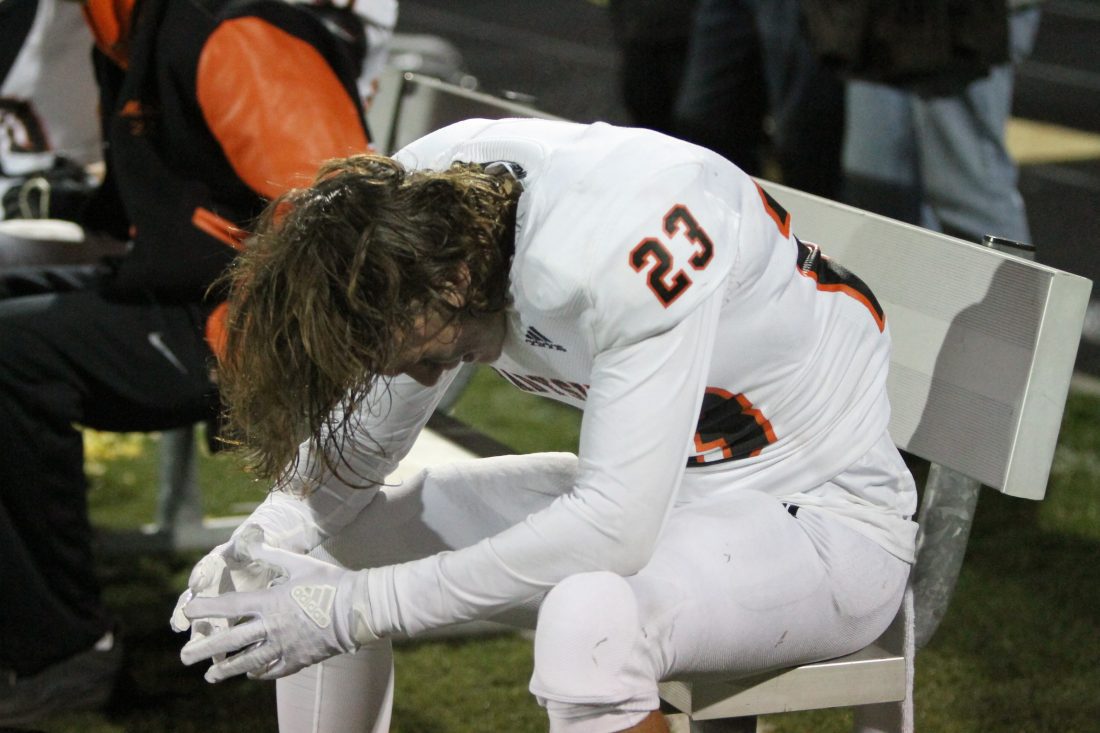 Photo/TERRY HANCOCK SHADYSIDE junior defensive back Jordan Joseph can't bear to watch as the final moments of Saturday's Division VII, Region 27 semifinal wind down at Eugene Capers FIeld. The Tigers were dealt a 40-0 loss by Newark Catholic, ending their season at 8-4.

BYESVILLE — Not many football teams have had their way with Shadyside. Newark Catholic is one.

The second-seeded Green Wave (9-3) continued their dominance over the No. 3 Tigers with a convincing, 40-0, shellacking Saturday night in an Ohio Division VII, Region 27 semifinal at frigid Eugene Capers Field on the campus of Meadowbrook High School. The victory was Newark Catholic’s fifth in as many tries against the Belmont Countians.

With the setback, Shadyside (8-4) saw its second consecutive season end on the artificial surface in Guernsey County. The Orange fell to Fort Frye in last year’s Division VI regional final.

“We got beat in every facet of the game … offense, defense, special teams, intensity, energy, coaching … . It all accumulates to having a running clock,” Shadyside head coach Mark Holenka assessed.

Green Wave quarterback Matt Carlisle ran for 119 yards and two touchdowns while tailback Derek Hawk added 103 and a score. Hawk got the scoring under way when he sprinted 66 yards on a fourth-and-1 on the initial possession of the game. Ryan Auer added the first of his four PATs.

Carlisle went in from 10 yards out for a 13-0 lead as the pass for two points failed.

Slater Evans, who had a monster game, scooped up a bouncing punt, started right before reversing field. He got to the far sidelines and weaved his way through traffic the final 10 yards en route to a 48-yard return. The PAT was blocked, leaving the Green Wave ahead 19-0, which they carried into the half.

Shadyside’s high-powered offense was held to a mere 46 yards of offense in the first half. The Tigers ended up with 209.

The Tigers, who didn’t cross midfield until early in the third quarter, did get close enough to allow Angel Velasquez to attempt a 35-yard field goal. The kick was blocked by Derek Hess and Evans picked it up. After a moment of no one moving, the speedster took off on a 72-yard return. Auer’s placement made it 26-0.

Carlisle added a 9-yard TD scamper and Kyle Langenbrunner went 82 as the margin increased to 40-0.

Sophomore quarterback Rhys Francis completed 10-of-21 passes for 100 yards, but was picked off three times. Evans had two of the picks while also recovering a fumble. Wyatt Reiman, another soph, had 93 yards rushing and caught four passes for 51.

Newark Catholic will now meet top-seed Canal Winchester Harvest Prep, which defeated Waterford 35-21, next Saturday at a site to be determined today by OHSAA officials.

CRESCENT — It’s a well-known fact that when a pair of rivals meet, no matter the sport, you can throw the ...

Snodgrass’ passion for prep sports will be missed at OHSAA