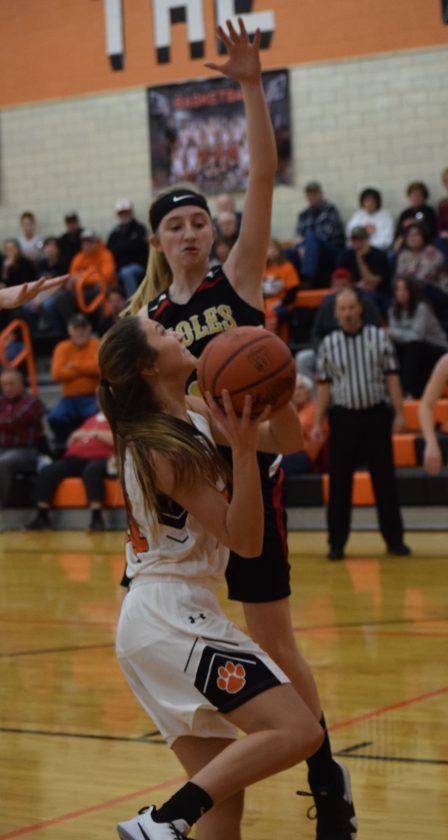 SHADYSIDE’S Paige Gorby goes up for a shot against Monroe Central’s Haylynn Hiles during Monday’s game at Shadyside. The Seminoles posted a 55-47 victory.

SHADYSIDE — Doing the little things in a basketball game like controlling the tempo, rebounding the ball, converting at the foul line and capitalizing on opportunities are normally key ingredients to success.

Monroe Central did every one of those Monday evening inside Shadyside High School.

Factor in that the Tigers converted only 8-of-38 shots from behind the 3-point line and it equated to an impressive 55-47 victory for the Seminoles (2-1).

“I am proud of how we hung in there and stayed strong each time (Shadyside) made a run at us,” Monroe Central head coach Troy Baker said. “This is a really good win for us.”

Meanwhile, on the other end, Shadyside (2-1) head coach Serge Gentile believes this loss will serve as an eye-opener for his team.

“I don’t know if we thought we could just show up and win games or what, but obviously we didn’t do the little things we needed to do to win,” Gentile said. “When you don’t do those little things, you need to be really, really good to get away with bad habits to win.”

The Seminoles and Baker experienced a case of deja vu early in the second half. After going into the locker room with a 29-28 lead at halftime, Monroe watched Shadyside hit a 3-pointer on consecutive possessions to open the half. All told, the Tigers started the third on a 12-4 run and opened up their largest lead at 40-32.

“It felt like what Union Local did to us on Saturday,” Baker said. “Our girls held in there, kept playing defense and kept working hard. We stayed strong. I am proud of how we hung in there.”

The Seminoles didn’t wilt and the Tigers cooled off considerably. After the barrage of shots to open the half, Shadyside converted only more field goal the rest of the game and that came with 4:14 to go in the contest.

“It’s tough to score when you’re not getting stops,” Gentile said. “We’re at our best when we’re getting out in transition, and we were slow. I don’t know if we had cement feet, but we weren’t matching up. We weren’t active or matching up and that comes back on me. We’ve got a lot of work to do.”

Between the field goals, Monroe Central scored 13 of the game’s next 16 points, including 10 unanswered to close the third. Talented and heady sophomore point guard Kalista Friday got a steal and layup to end the third and proceeded to open the fourth with a trey.

“As I’ve said before, Kalista is a ball player,” Baker said. “She’s a basketball junkie and makes everyone on the floor better. She’s tough to guard.”

Shadyside — behind the relentless play of junior guard Tory Hendershot — tied the game at 45 with the aforementioned fourth-quarter field goal.

However, the Tigers didn’t score again until there were just 27 seconds remaining in the game. Monroe Central — with Friday and post Amy Bettinger leading the way — scored 11 in a row, including a sharp six-of-seven effort from the foul line during the spurt.

“Give Monroe all the credit because they were simply better than us in every facet,” Gentile said. “They were better coached, better fundamentally and they took advantage of everything we were lacking.”

Shadyside, meanwhile, was led by Hendershot, who went for 16. Senior Brooke Selmon knocked in five bonus goals for 15 and junior Baylee Wach added 14.

The loss drops Shadyside to 2-1 and its road gets no easier. The Tigers are on the home boards again Wednesday against West Virginia big-school power Morgantown.

The Seminoles, meanwhile, make their home debut Thursday against Bridgeport.

STEUBENVILLE — Although American Legion baseball has been sidelined for the summer, on both the national and ...