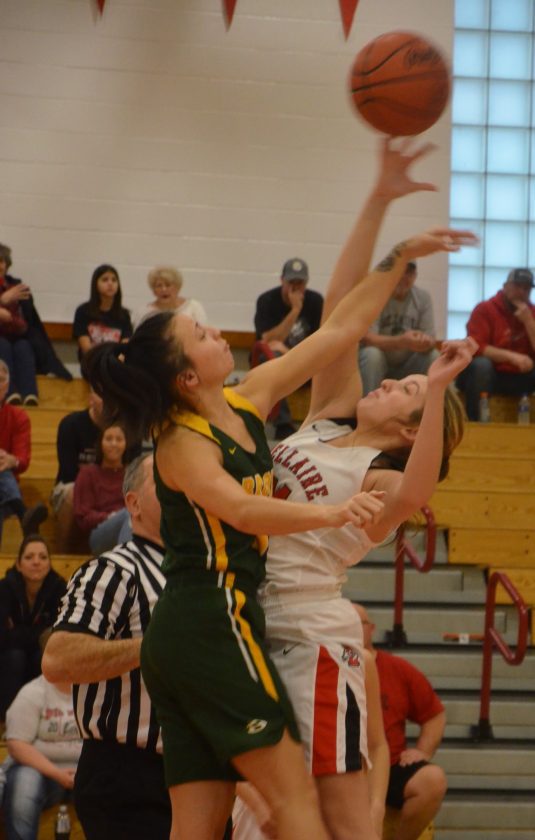 BELLAIRE — The Bellaire girls’ basketball program is rich in tradition. However, the 2019-2020 senior class will be remembered for what it accomplished Saturday afternoon.

Katrina Davis, Mia Gavarkavich and Tayah Frazier became part of history after the Big Reds (10-4) won their 74th career game with a 66-48 triumph over visiting Brooke inside the “House of Champions” on Guernsey Street.

“There were some really good teams here in the 1980s and the 1990s. Even before that Lucille Fitch had teams that won every game, but they didn’t play that many back then,” Bellaire head coach John Farrier said. “Tayah is new. She played her freshman season, but not the next two. Katrina and Mia have been with us for the entire four years.

“Kat has been a starter from Day 1. Any team she’s been on, be it cross country, basketball, softball, she’s been a winner. She knows how to get it done. Mia’s been right there along the way. These two have won a lot of games together.

“It’s a tribute to those two girls for the time and effort they’ve put in over the last three-plus years,” Farrier added. “I’m happy for them.”

Bellaire trailed 5-4 after the Bruins’ Madison Platt hit the first of her five bonus goals, but the Big Reds went on a 17-5 run to end the quarter with a 21-10 advantage. Davis sparked the surge with 10 points. Frazier and Jayden Lowe had four apiece.

A 16-2 run to start the second quarter all but sealed the deal as Davis netted 11 and Frazier five. The hosts held a 44-14 margin at the half.

“We had a bad start. A lot of bad passes and not stepping to the ball. We didn’t get back on defense either,” Brooke head coach Amy Servevicz said. “It’s frustrating because that is what we worked on yesterday (Friday) in practice.

“But the girls redeemed themselves and had a better second half,” she added. “We came out a little bit stronger. The third quarter usually kills us but it was the opposite for us today.

“It feels pretty good. It’s pretty awesome to be a part of winning that many games, “ Gavarkavich said. “We work hard all year around to get ready for the season. It’s paying off.”

Davis continues to flash all of her skills as she finished with 27 points, ight rebounds, eight steals and eight assists. Her point total pushes her into sixth place on the all-time female scoring list at Bellaire with 1,320 markers. She passed former teammate Maci Crozier during Saturday’s contest. She needs 34 more to take over third place by passing Kierstyn Kidder (1,334), Marci Bonar (1,337) and Amanda Whitecotton (1,353). Ashley Vavrek (2,036) is first and Kacie Vavrek (1,631) second.

“It’s always been a goal of ours and we knew we could get it this season,” Davis said. “I’m glad we could accomplish it today.”

Farrier, while happy with the victory, knows there still work to be done.

“Right now at the 14-game mark, we’re happy with where we are at. We avenged two of our losses last week and have the other two coming up,” he said. “With this win we should be pretty close to second place in the OVAC (Class 3A) race. We want to get in there and see how we can do. Then at tournament time we should be a better team and get a couple of wins there. We’re hoping to get them to 80.”